Varus derotational osteotomy (VDRO) with open hip reduction for hip subluxation or, as I call it, hip surgery. That's what was recommended to us when it was discovered that Chloe's hip was out of socket in October. I was told recovery can be rough for anyone, but especially fragile kiddos like Chloe. A lot of kids don't seem to have pain associated with a dislocated hip (which is astonishing to me). Well, Chloe did not fall into that category. She definitely had pain, sometimes excruciating and unbearable pain, because of this. Since I consider that unacceptable, we opted to go forward with the surgery. I cannot explain the turmoil I had over this and it did not help how utterly happy Chloe was the morning I took her in for surgery. I knew she was going in to surgery happy as ever and that she would definitely NOT be happy after surgery and didn't know how long it would be until she was happy again. It was heart wrenching! But I did it. Here is the journey.


So it's only been a few days since that follow-up visit. It was just that morning when Oby and I noticed a big change. And we've been using fewer meds and seeing more smiles. She still has quite a bit of pain on occasion, but it is less frequent and easier to manage so I feel like we have turned that corner. She is starting PT next week and has an intensive PT session scheduled in two months. This means we are looking forward and hoping for PROGRESS. I will never, ever stop hoping. Though I can hardly say this is completely behind us at this point, I will say I feel like it was the right decision for Chloe and I'm glad it's done. It was not easy, but I think it will be worth it.
No comments:

﻿
I don't know that I've ever had such mixed emotions about a trip. It was the best of times, it was the worst of times. Truly. Chloe's hip pain was severe (she was scheduled for surgery two days after we got home), she started having new seizures, she was in a lot of screaming pain and just plain miserable....about 70% of the time. But 30% of the time, she was happy as ever! And it was Sam's first major road trip and first time at Disneyland. He was shockingly unimpressed with Disneyland, but loved watching movies in the car (believe it or not, we bought our first DVD player for the car just before this trip and he was simply fascinated by the concept), and loved being with cousins, grandparents, aunts and uncles at the rental house. It rained three out of the four days we planned on going to Disneyland. Like major downpour. It was a hard trip, but oh so worth it! Here it is in pictures.
The road trip there, we made it to Mesquite and stopped early to give Chloe (and us) a reprieve from the screaming and crying. Sam thought the hotel was the very best thing ever!
﻿ 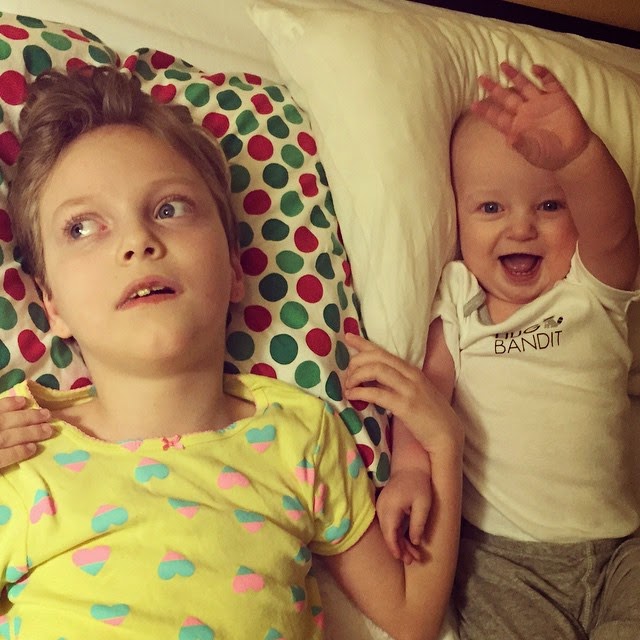 First day at Disney was probably the best one. The weather was lovely, Chloe was relatively happy, and we enjoyed riding the rides! I think Chloe's favorite rides that day were Dumbo and Peter Pan. So we rode those rides 2 or 3 times! Sam was truly unimpressed with the rides, but loved standing in line with family! :D
﻿ 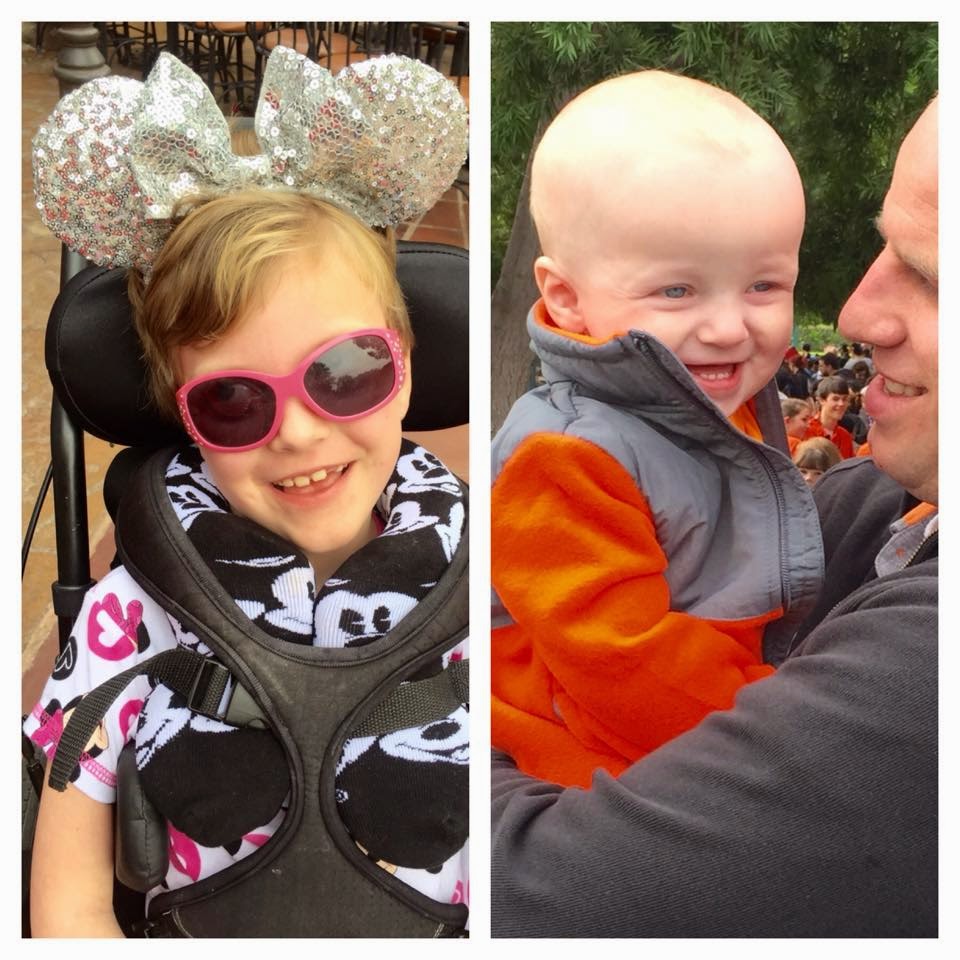 Day 2 was a downpour, but Chloe was her happiest that day! We braved the storm for as long as we could. I'm glad we stayed as long as we did because it was one of my favorite times of the entire trip! We spent most of that day at California Adventure, which meant...Chloe's favorite ride, the rocking Ferris wheel! It terrified us as usual, which made her giggle and squeal even more than usual! Sam's expression never changed on any ride. What a crack up! Chloe's g-tube came out when Oby was getting her back in her chair that day after riding Monster's Inc. I had a panic attack mainly because I wasn't sure if I had the syringe I needed to fix it, but when I got her to the bathroom, all I needed was there and we got put back together no problem. Whew. But seriously, what a day.﻿ 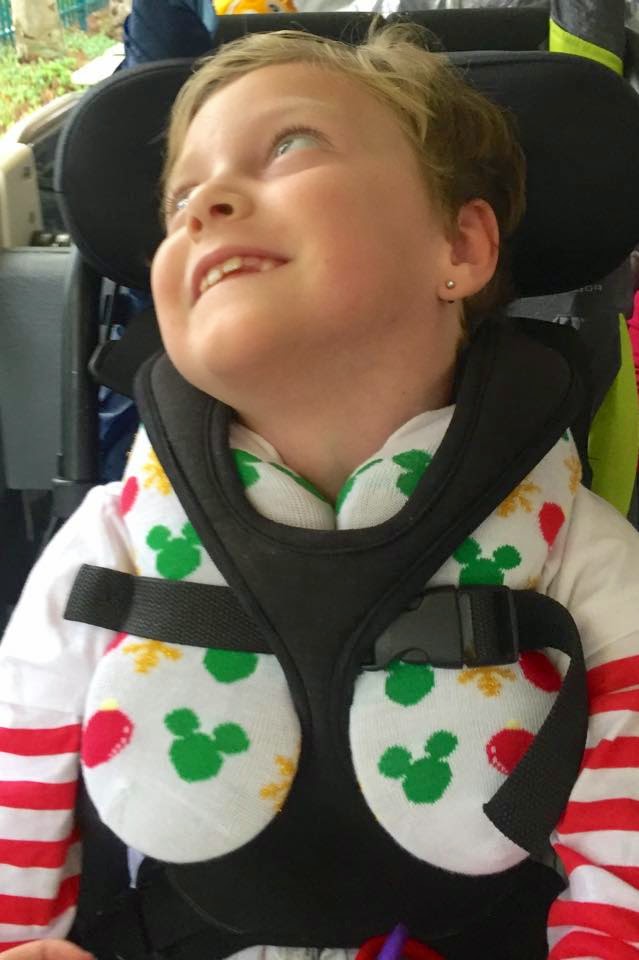 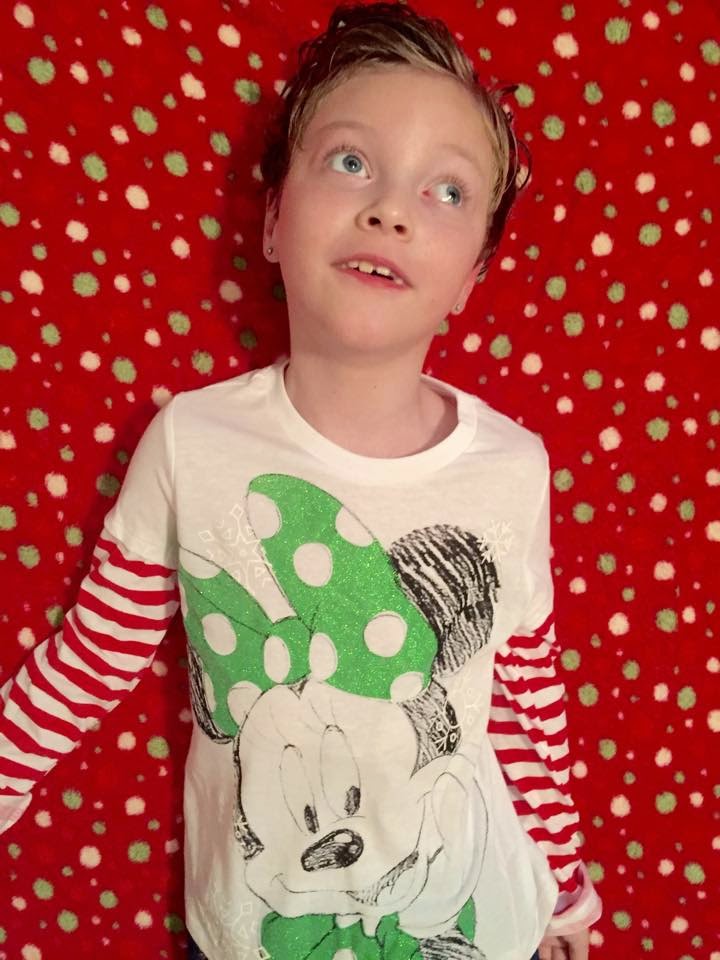 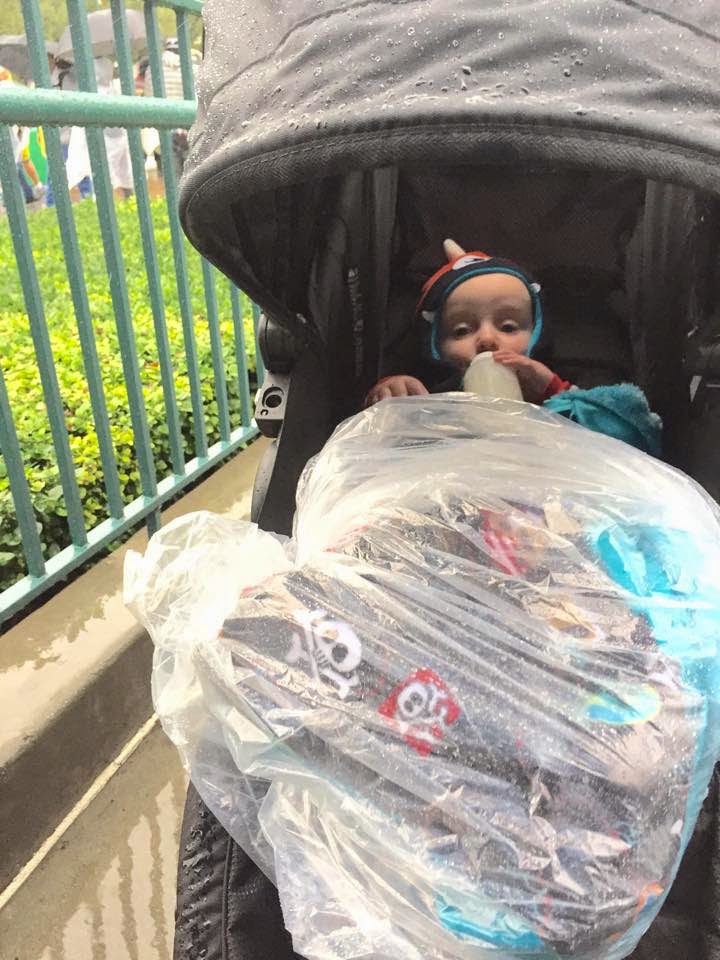 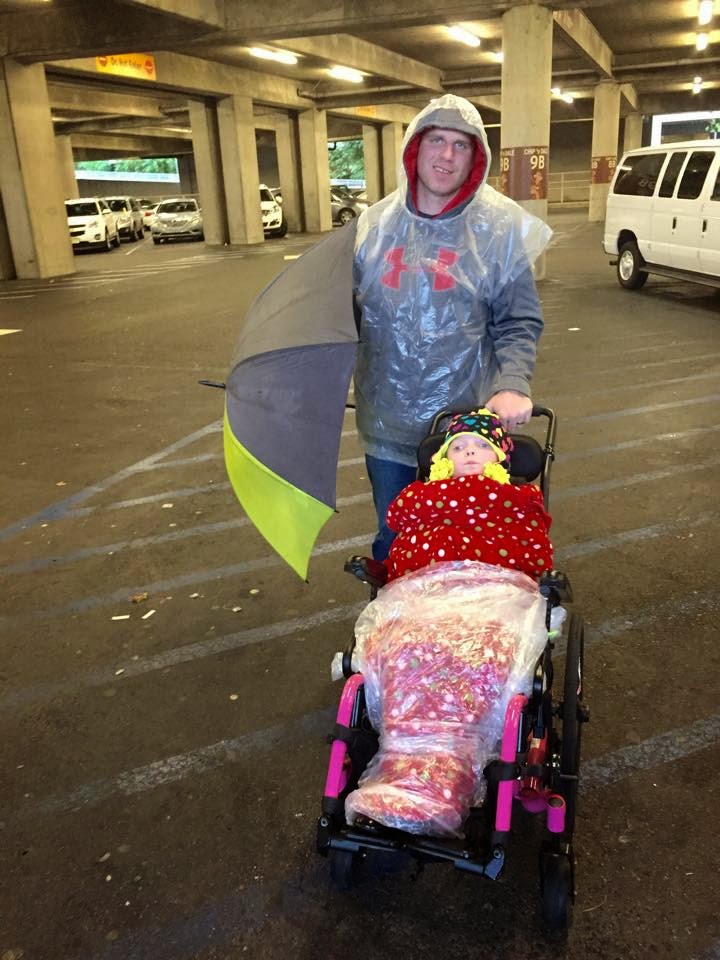 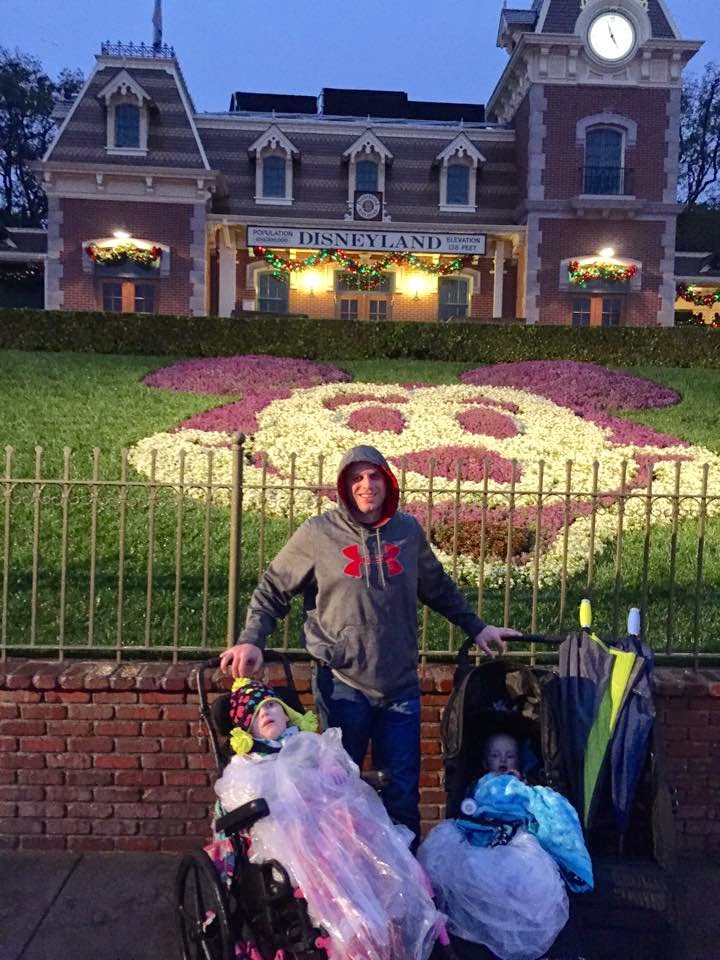 The rainy day was rough on the entire group so we took the following day off since it was still raining. We just hung out at the house, swam (Chloe's favorite, of course and Sam liked it too), and went shopping. Oh and I took Chloe to the ER and she had three new seizures. Sigh.
Third day at the park was sunny and beautiful and Chloe screamed nearly the entire time! I was bound and determined to muscle through it. We took turns holding her/riding rides. Twice I went to take her home and when I would be walking back to the car, she would be all smiles! So I would try again and it would start all over. Here was the smile I was talking about.﻿ 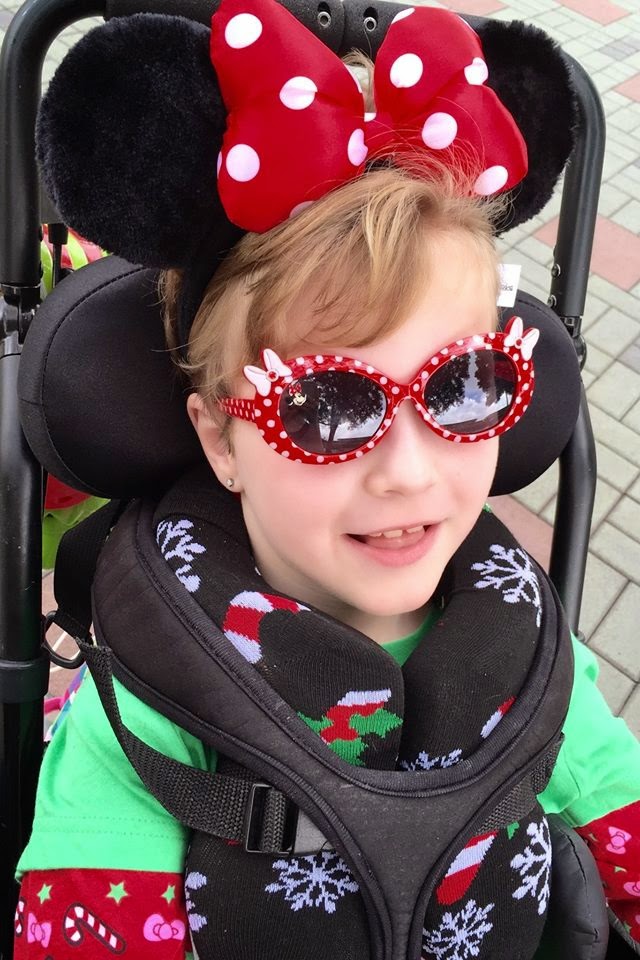 The fourth day at the park was a Friday. We hadn't planned on going on Friday because we knew it would be that much busier on the weekend, but the weather changed our plans so there we were on Friday. It did, indeed, take three times as long to park, twice as long to get into California Adventure, and the crowds were insane. By the time we finally got in line for the first ride, Chloe was already done and screaming bloody murder. So we walked out and called it a day. Here is the Facebook post about my feelings at that moment, that I included with this pic from the first day.
﻿
The best day of the trip, beach day! Huntington Beach:
Be warned. I am going to tell a pooping story. The blog is named TMI so, really, you've been warned twice! ;)
The night before, we had given Chloe a liquid glycerin suppository, which usually works almost immediately (Chloe poops right away). But she hadn't gone and we just chalked it up to being out of her routine and all the pain and seizures and just everything being completely out of whack. We have used these suppositories for 4-5 years and have to use them once or twice every single day because Chloe is unable to go on her own. We rolled Chloe in her wheelchair and Sam in the stroller and got to the beach. It was an absolutely lovely day, surprisingly not too crowded at all, especially for a Saturday, and both kids were super happy!﻿ 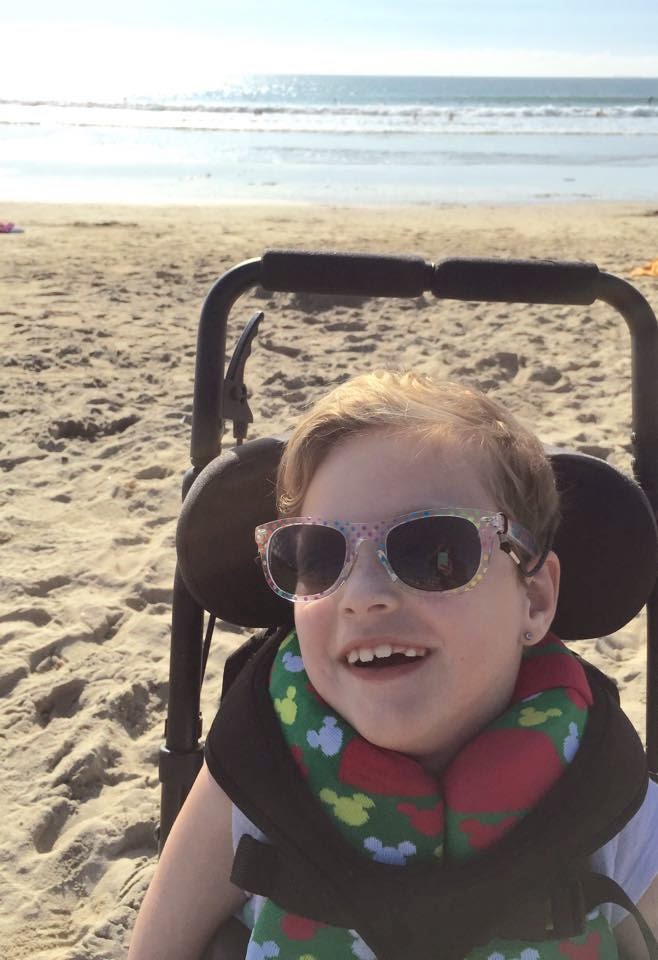 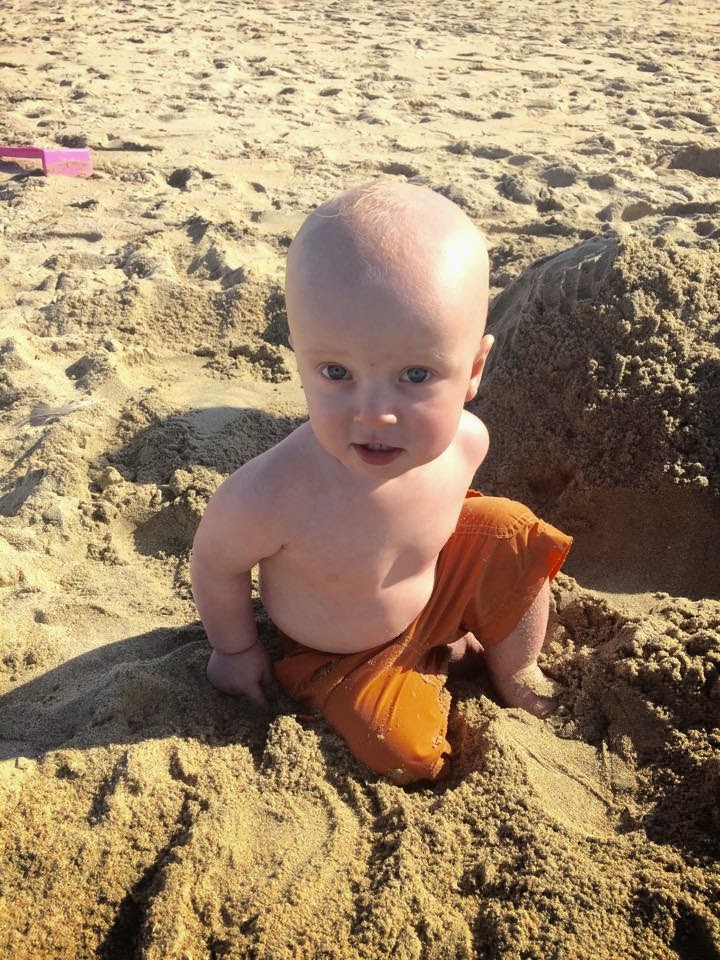 Sam took to the sand immediately. That boy LOVES sand! Who knew? So he was crawling around without a care in the world. We were supervising him and got Chloe in her swimsuit. We had just taken her diaper off and we didn't put a swim diaper on because they are only for poop and Chloe, like I said, hasn't gone poop on her own most of her life, but especially the last 4-5 years. She had been in her swimsuit without a diaper on for maybe 3 minutes when Oby picked her up to carry her closer to the ocean and felt...a giant poop! So basically the perfect storm of Chloe randomly pooping on her own (probably just a majorly delayed reaction from the suppository the night before, but that is still completely random because there usually is NO delay), and just that short time when she didn't have a diaper on and we didn't have the proper supplies to clean up. It was a big brown mess for a minute! LOL! But Oby's sister, Taylor, helped with Sam and Oby and I managed to get things taken care of pretty quickly. It was just honestly the weirdest thing! We couldn't believe it!
Okay, last poop story for this post! Ha! So then we took her down to the water and let her sit in her bath chair. This was perfect because the water was too cold to just let her be in it with how skinny she is, but just having the waves roll up on her was okay and she absolutely adored it! Sam wasn't too crazy about the water, but I'm telling you he was in LOVE with the sand! He's my little sand man. Everyone had a great day, we got lots of pictures, and it was a highlight to the trip for sure! Which was kind of funny because it was free and planned last minute. Isn't that just how it goes?! 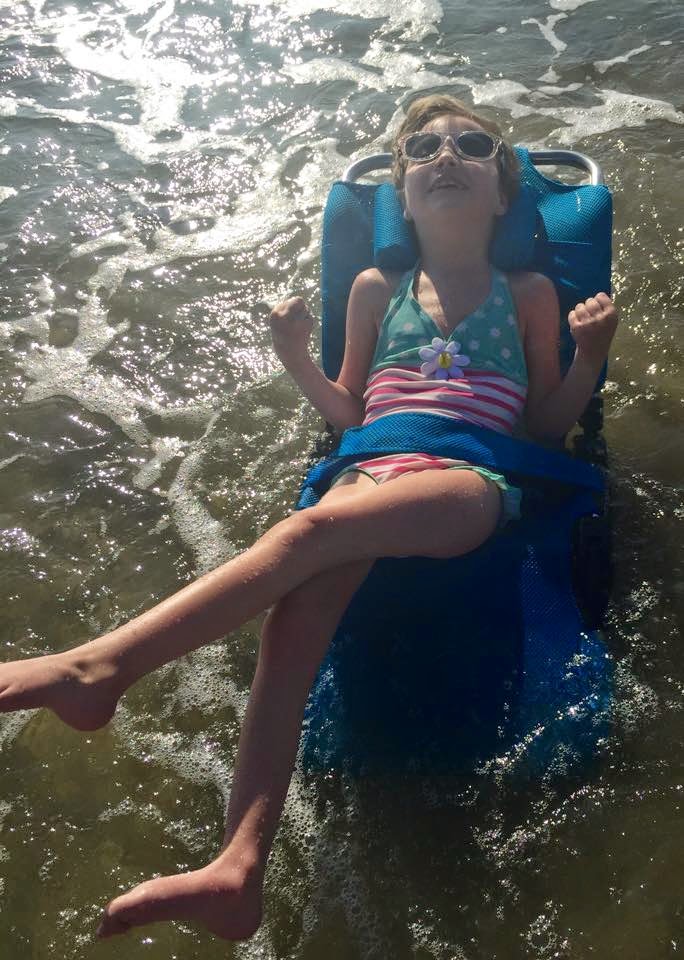 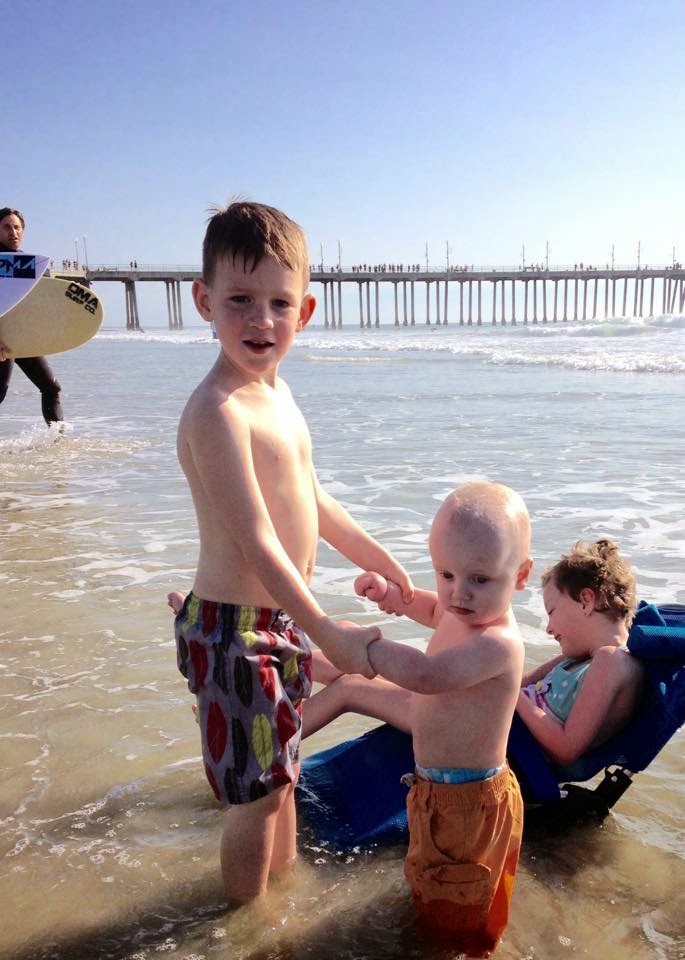 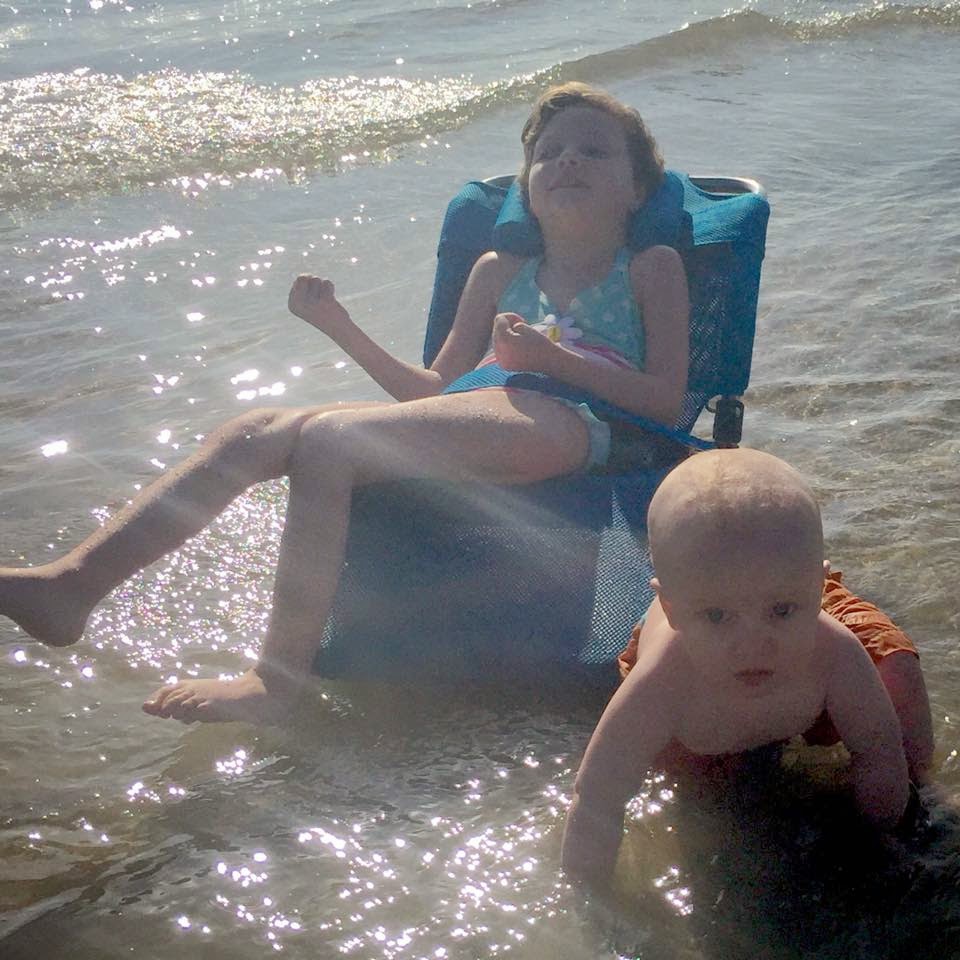 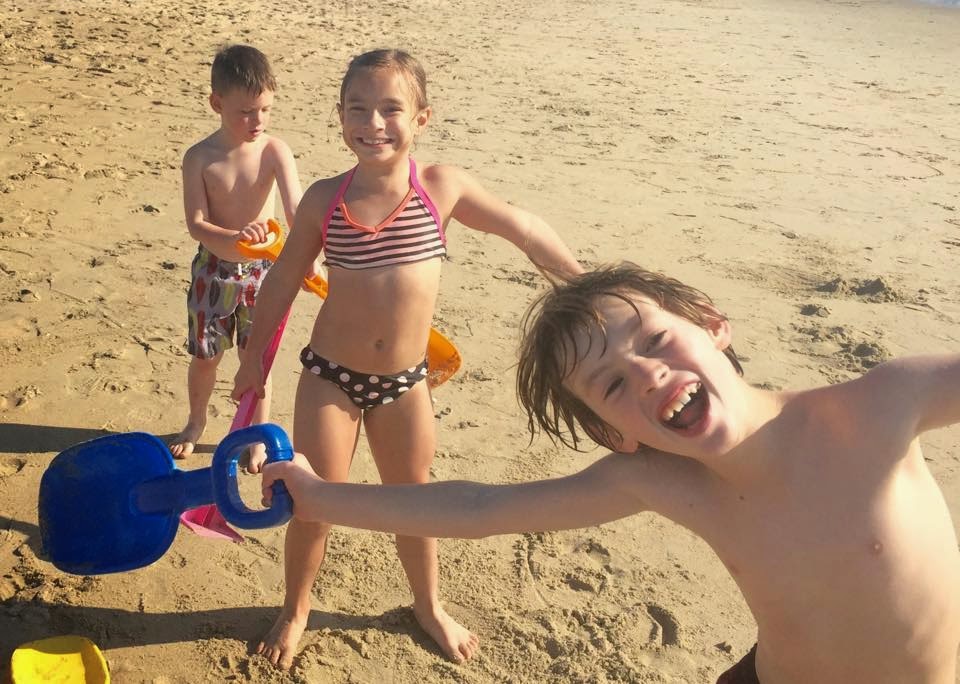 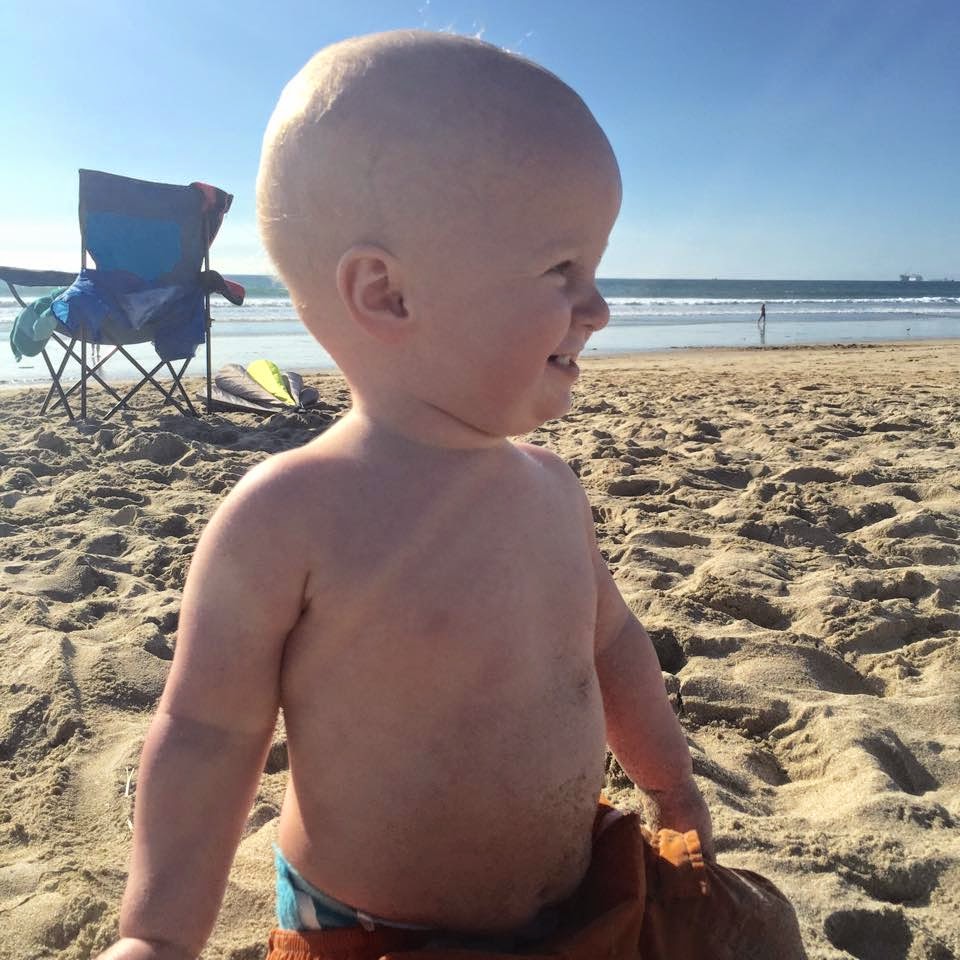 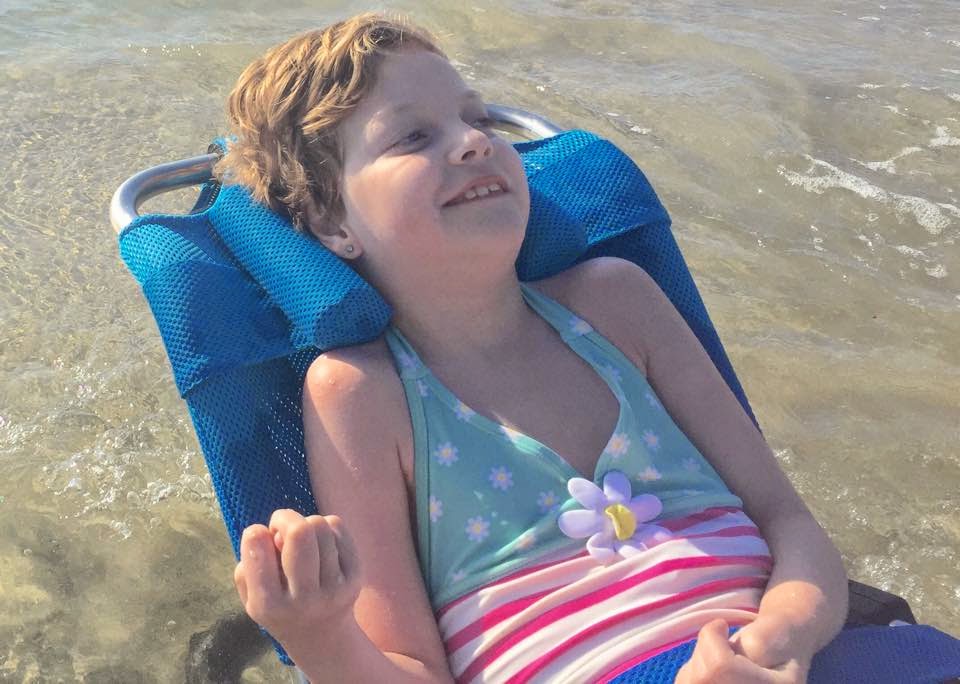 The drive home was surprisingly not too terrible. We gave Chloe Dramamine, thinking maybe she was feeling car sick on the way there, and put sunglasses on in case the sun might be bothering her. We stayed in St. George and went swimming at the hotel there. It was a pleasant surprise and great way to end an emotional trip.
1 comment: 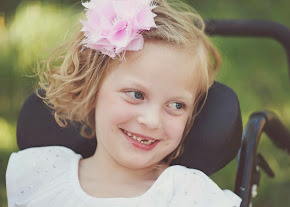 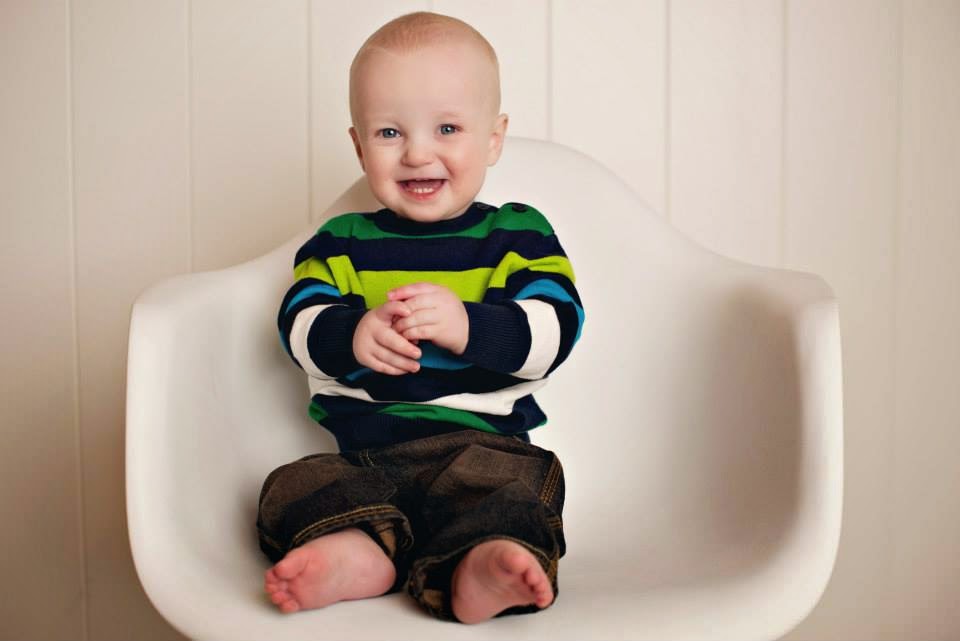 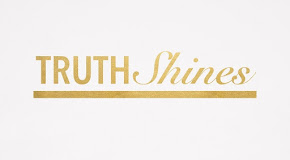 Seek and ye shall find